Engage your students with our hospice and palliative care curriculum resources

Ted and I have been travelling for the past week and have packed a lot into a short period of time!

We attended the PSNO PSW Conference 2014 in Markham, ON on October 21st. It was wonderful to meet 300+ personal support workers! One PSW, Derek, spoke about his work in hospice palliative care and highlighted some of the challenges. What stood out me was his emphasis on the value of team.

A big thank you to the PSW’s who stayed for the closing plenary. I know you were tired after attending for the entire day. I appreciate being able to tribute you and reflect on my learnings in HPC.

Next was the OCSA Annual Conference on October 22nd and 23rd.  Harry van Bommel, M.Ad.Ed., CTDP, spoke on Putting the ‘Care’ Back into Healthcare. Mr. van Bommel has developed resources to help people navigate and negotiate the system and these resources can be used and adapted to people’s local areas. He is as warm and as kind as when I met him in 1992 after the CHPCA conference in Winnipeg (my first HPC conference). I had the pleasure of meeting with Kathy Duncan from PalCare Network.  They have regular courses they offer in Newmarket, ON and an extensive library of palliative care books, manuals and journals available for loan. They also have a special conference coming up in March 2015 for PSW’s and community members that sounds fabulous, so if you’re in that area you may want to contact them to find out more information.

In the morning I met a beautiful woman named Jenny from Thunder Bay. She spoke about her work with such joy. Then she talked of the challenges and violence that has been happening in her community.  Within an hour she came to our table and told us about the shootings f the soldier in Ottawa.

As the day progressed and the story unfolded, my heart went out to those who mourn the death of Nathan. And along with other Canadians I share the collective sorrow that comes with witnessing violence born in mental illness.

Next up is Niagara Falls, Ottawa and then the OLTCA Fall Symposium in Markham which we’re really looking forward to. 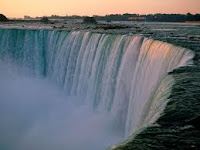 The NACC has just updated their Personal Support Worker Program with the launch of a revised module on caring for the dying!

Last year the “Essentials in Hospice Palliative Care” manual and companion resources were approved by the National Association of Career Colleges for their Personal Support Worker education program. Earlier this year I was invited by NACC to rewrite the curriculum about caring for the dying person.

I was thrilled to develop this module, now titled “Care of the Dying Person and Their Family: Essentials in Hospice Palliative Care”.

Thanks to Linda Von Tettenborn for your consulting support, and thanks to the NACC Advisory Committee for your expertise.

Today the presentation to launch the materials was well received. We look so forward to hearing how the implementation goes for the colleges and welcome any feedback!

Early this morning Ted and I walked along by Niagara Falls. What an amazing site, all the more amazing because we were alone in the early morning hours. As I contemplated the “Seven Wonders of the World” I reflected on caregivers, the incredible contribution they make and suggest that caregivers are also one of the great wonders of the world!

Any cookies that may not be particularly necessary for the website to function and is used specifically to collect user personal data via analytics, ads, other embedded contents are termed as non-necessary cookies. It is mandatory to procure user consent prior to running these cookies on your website.