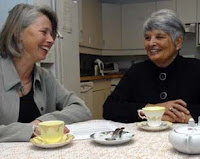 Senator Carstairs is a legend! She has advocated tirelessly for HPC in Canada for years. She spoke at the Hospice Palliative Care Ontario conference yesterday. It was a privilege to hear her speak.

I thought that those who were not there, might like to hear a few of her comments. Here are a few of my notes:

10% of Canadians die suddenly. 90% of Canadians can use HPC services. Less than 30% receive support from a specialty HPC team. The majority of those who receive the services die from cancer. People dying from non-traditional hospice diagnoses (including chronic illnesses), those living in rural and First Nation communities have greater difficulty accessing resources. We have a long way to go!

Euthanasia,… the debate is coming forward again. We should NOT discuss this in a vacuum. We need to first ensure that every Canadian has access to Hospice Palliative Care – and only then have the debate! When people have access to good HPC their perspective on euthanasia changes.

HPC needs to be a core service in health care, not an optional piece that each area of health care can put aside.

She quoted Harvey Chochinov’s great statement regarding HPC not having a vocal constituency:
“The dead are not here to speak, the dying are too weak to speak, and the bereaved are too overcome by their grief to speak.”

Senator Carstairs said, “I believe HPC is an art. It is the essence of our humanity.”

Personally, I enjoyed hearing the story of how she came to politics. At 15 years old, she graduated from high school. She applied to nursing. Apparently her mother switched her application from nursing to pre-medicine. Then in second year she took an elective in Political Science – and the rest is history!

How fortunate we are that she followed her love of politics!

All the best Senator Carstairs. Thanks for staying on as a “champion” even when you retire from the Senate!

This website uses cookies to improve your experience while you navigate through the website. Out of these cookies, the cookies that are categorized as necessary are stored on your browser as they are essential for the working of basic functionalities of the website. We also use third-party cookies that help us analyze and understand how you use this website. These cookies will be stored in your browser only with your consent. You also have the option to opt-out of these cookies. But opting out of some of these cookies may have an effect on your browsing experience.
Necessary Always Enabled
Necessary cookies are absolutely essential for the website to function properly. This category only includes cookies that ensures basic functionalities and security features of the website. These cookies do not store any personal information.
Non-necessary
Any cookies that may not be particularly necessary for the website to function and is used specifically to collect user personal data via analytics, ads, other embedded contents are termed as non-necessary cookies. It is mandatory to procure user consent prior to running these cookies on your website.
SAVE & ACCEPT