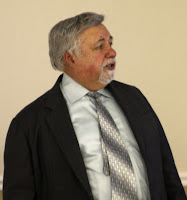 One of the highlights of the ADEC conference was a half day session with Ken Doka on Disenfranchised Grief.

Ken started the session by trying to set us all at ease, encouraged us not to worry about what we have said or done in the past and mentioned an interesting article, “On doing everything right, a case study in failure” that sounds interesting.

It was interesting to hear his “ah ha” moment which gave seed to the development of this theory of “Disenfranchised Grief”. Ken coined the term to describe the grief that occurs when the loss is not socially sanctioned, openly acknowledged or publicly mourned for the following reasons:

Ken highlighted ways the theory has been applied and how it has grown in the years since he first wrote about it.

He also wove the idea of grieving styles, Instrumental vs Intuitive, into the discussion. He suggested that disenfranchised styles include:

Ken introduced me to “empty arm syndrome” associated with perinatal loss. Following the death of a baby, mothers have sometimes developed pain in the heart, breasts, lower abdomen and upper arms. The location of the pains symbolizing the connection of mother and babe.

Ken identified interventions for each of the “tasks” and provided some stories to anchor the learning.

After years of hearing about Ken from our mutual colleagues, Terry Martin and Dana Cable, reading his books, seeing his name in much of the current grief literature, and having him interviewed for the Life and Death Matters Podcast Library, it was a great pleasure to hear/see him present.

This website uses cookies to improve your experience while you navigate through the website. Out of these cookies, the cookies that are categorized as necessary are stored on your browser as they are essential for the working of basic functionalities of the website. We also use third-party cookies that help us analyze and understand how you use this website. These cookies will be stored in your browser only with your consent. You also have the option to opt-out of these cookies. But opting out of some of these cookies may have an effect on your browsing experience.
Necessary Always Enabled
Necessary cookies are absolutely essential for the website to function properly. This category only includes cookies that ensures basic functionalities and security features of the website. These cookies do not store any personal information.
Non-necessary
Any cookies that may not be particularly necessary for the website to function and is used specifically to collect user personal data via analytics, ads, other embedded contents are termed as non-necessary cookies. It is mandatory to procure user consent prior to running these cookies on your website.
SAVE & ACCEPT